Memory Scale
"By the time I get to Phoenix, we'll be rising. He'll probably leave a note right on the door."
Memory Scale
0
▶
▶

The Analog Sunset Memories brings together titles composed between 2007 and 2017. Like memories, these recordings are linked together, put together to form a whole. Originally planned for the audio cassette format (and also available in digital on Bandcamp as 2 mixed files, ie the A & B sides), I wanted to publish this album in a more traditional way. Some interludes are missing from the cassette version. We must give the original object a certain exclusivity.

"Blending together ambient and electronica, Memory Scale creates a world all of its own that features various soundscapes, glitch like fx and more. In specific, the song, “Seize Neuvième” from the album The Analog Sunset Memory showcases Memory Scale’s unique ability to create a new and mesmerizing universe of sound.

Opening the song is an explosive like synth that quickly fades and gives way to layers of pads and textured sounds. Somewhere hidden within the notes and melodies is a retro 1980’s feeling - almost like a slight nod to the early emergence of synths. " - Rural Sounds, march 2019 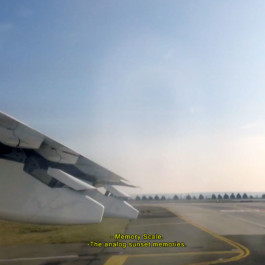