Memory Scale
"By the time I get to Phoenix, we'll be rising. He'll probably leave a note right on the door."
Memory Scale
0
▶
▶

MEMORY IS THE FOURTH DIMENSION TO ANY LANDSCAPE

"I recorded this song on 2021, june, 23rd. A night spent in the studio where it all started with a few guitar notes recorded on a cassette tape recorder. This served as the basis and inspiration for the search for generative patches on my modular synthesizer. Recorded in one take, the sound sources were then modulated by serveral Max4Live devices, also based on generative and machine learning processes. Then I played a Wurlitzer organ, also in one take.

The next day, I did the mixing of the song with a rather marked spatialization approach. I also strongly favor listening to headphones.

The third day was devoted to mastering, also focused on space, depths and density. But the story of "Memory is the fourth dimension to any landscape" is not limited to these 3 days and its genesis finds its source in images, feelings, encounters, the unconscious, wills, labor, errors, chance." 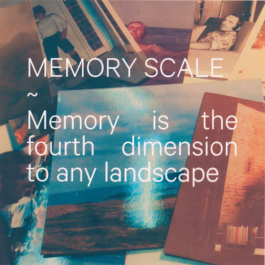